There's no off-season when it comes to Payworks staff volunteering with the Winnipeg Jets Hockey Academy (WJHA).

Last year, 23 individuals from Payworks volunteered for the True North Youth Foundation (TNYF)'s Living Philanthropy Program, where they supported two WJHA classes on and off the ice from October 2018 through May 2019. As stated by the TNYF, “More than coaching hockey, this approach builds relationships and fosters connections, allowing organizations to grow with their classes and provide consistent support and mentorship through their years in the WJHA until high school graduation."

On-ice volunteers Peter Taylor and Amanda Lefley were so engaged by their experience with the WJHA that they committed to staying involved in the off-season as well. Together, they used their Payworks Pay it Forward (PIF) Days to volunteer at the TNYF's Camp Manitou where WHJA participants were participating in a week-long summer/hockey camp that's offered to all 850 student athletes.

"We started the day by assisting the camp counselors in the supervision and guidance of Camp Manitou's morning activities, which included everything from rock climbing to archery and swimming," explained Peter, a Sales Consultant at Payworks Winnipeg. "In the afternoon our group went to to the Iceplex indoor rink facility, where we sat in on a nutrition class and also assisted with 60 minutes of on-ice hockey skill development. We ended the day with indoor dry land training and some games. The kids were exhausted by the time they climbed onto the bus for home. They were glad to see some familiar faces from the previous hockey season and some even asked us if we would be coming again to help out the next day."

Amanda, Payworks' Social Media and Content Coordinator, shared that she and Peter thought using their PIF Day at Camp Manitou would be a great way to continue to foster connections with the WJHA's student-athletes, as they both anticipated returning to volunteer with the TNYF for another season. 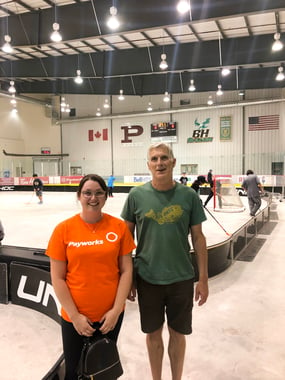 "It was awesome to see the kids outside of the hockey environment and hear about how their summer was going," said Amanda. "Some of the kids were moving to different schools and progressing a grade, so there were some players we wouldn't have the opportunity to coach the following year. It was great to be able to chat with them and give them words of encouragement one last time before the upcoming season. It was also very rewarding to see the students excel at other activities at the camp, making new friends, and overall just having a blast."

Both Peter and Amanda agreed that many of the students had improved their skating abilities and overall hockey skills throughout the WJHA season and into the summer, and that their confidence had improved as well.

"To see them happy, respectful and even share thoughts with us was heartwarming," said Peter. "It's wonderful that we can have this much impact on our community. I couldn't be more proud to be a Payworks employee and see all the positivity that can be created by paying it forward."

There's no off-season when it comes to Payworks staff

Photo courtesy of the Winnipeg Folk Festival.  For

When a cause is extra close to their hearts,

Payworks’ promise to our employees, clients and

The clock is counting down to Curling Canada’s 2019

You can't spoil a baby

With my second maternity leave rapidly approaching, I

Watch: our staff on-ice with the Winnipeg Jets Hockey Academy

There were 23 Payworks staff involved in the True

In the News: partnering with WJHA

As seen in the True North Youth Foundation's

Lacing up their skates to support the Winnipeg Jets Hockey Academy

Some of the most rewarding volunteer opportunities