In celebration of our 20th anniversary – and more specifically, two decades of community support – Payworks is honoured to announce a series of donations to several highly-deserving and impactful Manitoba-based not-for-profit organizations, in addition to maintaining our ongoing national charitable partnerships. To learn more about this commitment, please click here!

In the heart of Winnipeg, there’s a bustling team of over 75 staff and volunteers working tirelessly to “empower women, families and the community to move from where they are to where they want to be.”

Since 1999, the West Central Women’s Resource Centre (WCWRC) has offered a vast array of support and services that directly reflect the evolving and significant needs of their neighbourhood; in fact, they had over 24,000 visits in 2019 alone. From the early mornings into the evenings, WCWRC provides drop-in and food services, housing and income resources, training and skill building, and services in childminding and for newcomer women. They also offer Restoring the Balance, a “trauma-informed program founded on traditional Indigenous values, teachings and ways of healing to provide holistic support.”

Now, the WCWRC is looking to provide round-the-clock assistance in an entirely new way: transitional housing for women, gender-diverse individuals and children exiting situations of violence. The conversion of an unused apartment building just two blocks from WCWRC to 17 units of varying sizes will provide a home for these community members for up to two years while they envision and build new lives of safety, security and support.

Payworks is honoured to help the WCWRC bring this critical resource to the community with a $100,000 donation as part of our 20th anniversary donation series.

“One of the biggest barriers in exiting violent circumstances is that leaving often results in homelessness,” shares Lorie English, Executive Director of the WCWRC. “The limited pool of transitional housing in Winnipeg is both shorter-term and almost always full, and leaving Winnipeg means pulling kids out of school, sacrificing existing employment, and other logistical barriers. Our new facility will provide a stable base from which to access resources like the WCWRC’s housing workers, gender-based violence support system, employment counselling and more, and to eventually transition into permanent housing.”

The former apartment building, which has sat empty for over a decade, needs a complete renovation – right down to the studs. One of the first projects will be the installation of an elevator in this former walk-up to make it accessible. The WCWRC is also planning to create a secure rooftop play space for families in addition to the residential units, offices and childminding space. 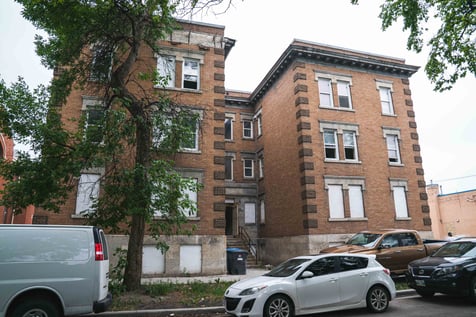 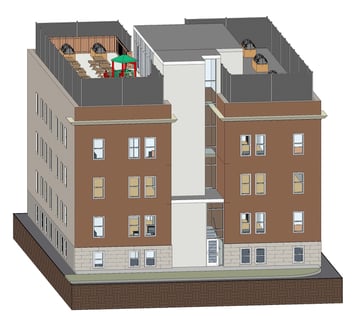 Photo caption: (Left) This former apartment building will be converted to transitional housing for women, gender-diverse individuals and children exiting situations of violence and provide a home for up to two years while they envision and build new lives of safety, security and support (Right - architectural render courtesy of the West Central Women’s Resource Centre).

While the WCWRC awaits confirmation of government contributions to the project, they’re in the process of gathering funds from individuals and organizations in order to make this vision a reality.

“We’re calling on this community to help us create a new option for women and gender diverse people,” says Lorie. “We want to build a space that’s not only safe and clean but also encourages the building of connections between our residents, where they can find community and break free from the isolation they’re leaving behind. The WCWRC is deeply grateful to Payworks and all other donors who are helping us bring this to life.”

“Starting out with a safe place to call home is a crucial first step in building a secure future,” says JP Perron, President and CEO of Payworks. “The WCWRC already does such tremendous work in supporting the women, gender-diverse individuals and children of our community, and has taken on the sizeable task of identifying – and overcoming – a major barrier to their basic safety needs. We extend our sincere thanks to the WCWRC and wish them the best of luck as they officially begin this leg of the journey to a better, healthier Winnipeg.”

To learn more about the WCWRC or make a donation of your own, please visit https://wcwrc.ca/.

At the beginning of September, Payworks’ 39-member, emp…

Resources | October 31, 2022
Overview of overtime: Employers should have a strategic plan that clearl…

Check out these 10 great reasons making a list makes go…