United Way Winnipeg held their Campaign 2018 Celebration event on January 17, wrapping up their most successful campaign yet with $21,300,000 raised for the critical work United Way agencies do in Winnipeg every day! United Way Winnipeg 2018 Campaign Chair Barb Gamey (Payworks CEO) was gifted with an Adirondack chair to enjoy at her cottage this summer, and then demonstrated her baton twirling skills with Emma Baker and Megan Falconer from Magic 'N Motion. Then she literally passed the baton to incoming 2019 Campaign Chair, Jeff Goy, President and Chief Executive Officer of Wawanesa Mutual Insurance Company. 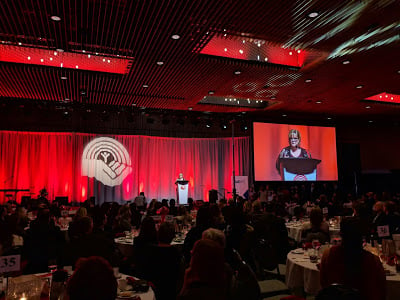 “In speaking with past Campaign Chairs, they all said it would be the most personally-gratifying volunteer experience of my life. Without a doubt, it has been absolutely remarkable," said Barb.

“While listening to the agency speakers throughout the year, I was struck by their circumstance and struggles that they’ve gone through. But I also heard resiliency, hope and sometimes humour in their stories… All of the big numbers are incredible, but it’s those personal stories that had the greatest impact on me.”

The Payworks team had much to celebrate last night, as Payworks was (again!) awarded the Campaign Chair’s Award for our 2018 Workplace Campaign, and Trevor MacHutchon, CRM Manager, won an Employee Campaign Chair Award for leading the Payworks United Way Committee to the successful workplace campaign with $234,849.36 raised!

"I was beyond excited and humbled to learn that I was chosen as a winner of the Employee Campaign Chair Award, but not necessarily for myself but for our team. The award recognized amazing ECC’s due to the success of their campaign but the campaign would be nothing without the amazing committees," said Trevor. "The hours and effort that our committee put in this year really blew me away and made me feel so proud and honoured to be a part of this amazing committee. I wish that every single one of our United Way Committee members could have joined me on stage because without them there would be no award. Our committee makes the job of being Employee Campaign Chair easy and I can’t thank them enough!"

Congratulations to Barb on leading this outstanding campaign, to Trevor and the Payworks United Way Committee on their awards, and to all of the other organizations who led workplace campaigns in 2018.

“My optimism for the future of our city is strong. As long as we have individuals who want to make a difference, our city is in great hands," said Barb.

Most importantly, let’s celebrate United Way Winnipeg and all of the work their agencies do, because we love Winnipeg! 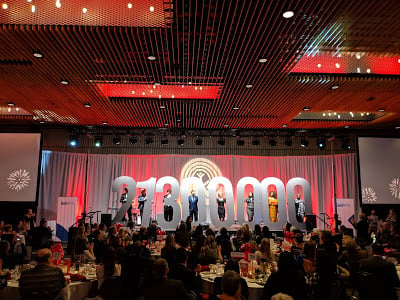 Applicant Tracking has introduced a new and easy way to…

Resources | May 25, 2022
How cloud-based workforce management can support your small business’ gr…

According to Business Development Bank of Canada (BDC),…

We’ve been working hard on a new evolution of payworks.…

While the COVID-19 pandemic required each of us to adju…

In Canada, not all employees are entitled to the same d…

Resources | March 30, 2022
How to hire (and retain) someone with a service mindset

While many small businesses across Canada are currently…

Pay It Forward | March 19, 2022
Staff return to volunteer for an all-time fave initiative

For the second year in a row, Payworks is honoured to h…

Today’s small businesses are facing an increased and hi…

Resources | March 10, 2022
Keep your info (& your biz) secure with insights from our experts

Business best practices evolve in response to the chang…