CodeWorks is a friendly contest that provides our DEV Team with the opportunity to bring their own innovative ideas to life. Essentially, twice a year, Payworks Systems Developers, Quality Assurance and Business Analysts, and UI Designers divide into teams and are provided a time-frame. From there, they are let loose armed with nothing but their ideas to make those visions into a reality for our company. When time is up, teams/individuals present their project to the entire group (that's one whole floor of our Head Office and National Service Centre in Winnipeg!) and the winner is awarded bragging rights and the Golden Keyboard. It might not be the Stanley Cup, but around our office it's a coveted designation.

Taking home the top prize in the March edition of the competition was 'Translation Station', an internal app that improves the existing process for translating English text to French within the Payworks modules. The members of the winning team were Systems Developers Ezra Lazar, Ryan Koop, Kyle Leung and Brent Rempel (pictured below L-R). 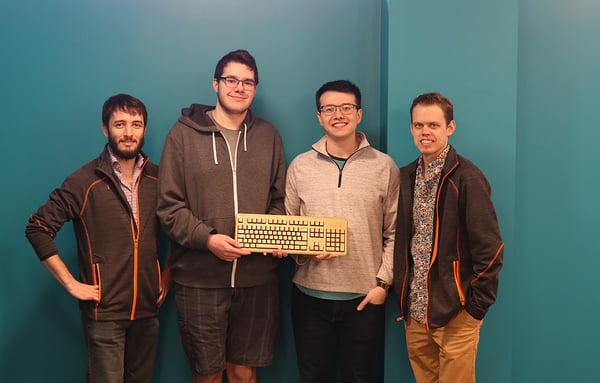 Payworks’ purpose – our reason for getting out of bed

Since 1996, Career Trek has been providing programs

Get to know the people at Payworks: Product Manager Steve Bestvater

They say that “home is where the heart is,” and

Throwback Thursday: Have you heard of the Parade of Popsicle's?

Members of the Payworks Implementation and Customer